The prevention of breast cancer – the answer is in our bodies

The prevention of breast cancer – the answer is in our bodies

Recently I undertook a research project at Bath University, looking at the effect epigenetics can have on the formation of breast cancer. What I found was really amazing, and very relevant, given the current trends of breast cancer worldwide.

Breast cancer is now so common it is hard to find someone who is untouched by the disease, either directly or indirectly through friends and family. It has become the enemy within and women across the board are now encouraged to perform breast checks for any sign of breast disease. October in the UK has become synonymous with pink ribbons to raise the awareness of the prevention of breast cancer and fundraise for breast cancer research.

I have seen so much in the news and in general about the few options available to women for breast cancer prevention and treatment. The most common option for treatment, and now also for prevention, is the removal of the breasts, and sometimes the ovaries too, even before any cancer is diagnosed, if the women are deemed to be at high risk of developing the disease.

Scientists have isolated the ‘breast cancer gene’ and can give genetic counselling to women with this gene as to what their options are. However, what I have found interesting is that the research or information I talk about below is seemingly not taken into consideration, let alone placed equally alongside all other breast cancer prevention options and treatments.

As taught in many high school biology classes, every person has DNA (Deoxy-ribo Nucleic Acid), which is like a genetic code that contains all the instructions needed to build everything that makes up the body, and make it function. However, what is not often taught is that your DNA on its own is only part of the story of how you come to exist and what happens to you during life.

Think of your DNA as a really, really long strand of string in our bodies, that is wrapped around little proteins called Histones. Your DNA wraps around a Histone, and then chemical tags can bind to these Histones. It is this second layer of structure (the chemical tags and the wrapping around the protein) that is called the Epigenome. It is the Epigenome that shapes the structure of your DNA.

The proteins help to organise the DNA because they have tails that can become covered with chemical tags and affect the DNA interaction. Some sections of DNA become tightly wrapped up, making the genes in that section inactive or unreadable. However, the proteins can also relax genes, making them active and easily accessible. So in effect, although your DNA code remains the same for life, your epigenetics are flexible, and whether a gene is wrapped up tightly and difficult to read, or is relaxed and easily accessible, is in reaction to your environment and your lifestyle factors – things like stress or diet.[1] So it can be seen that changes in our genes or DNA get switched on or off by our lifestyle and how we live.

So how does this relate to cancer?

Epigenetic events can affect many of the stages in tumour development; for example some of our lifestyle choices over time could lead to the section of gene that codes for slowing cell growth to be wrapped up tightly, while allowing the gene that codes for the speeding up of growth to be relaxed and readable, causing an increased chance of the formation of a cancerous tumour.

The epigenetic alterations that occur are not well understood, other than that they are key contributors to breast tumour formation. Breast cancer prevention, treatments and diagnostics are being developed by some researchers to target epigenetic changes.[3]

One such researcher is Mina Bissell,[4] who has shown that cancer is not only caused by cancer cells and out of control growth, but by an interaction between cancer cells and their surrounding cellular microenvironment.

Her talk on TED ‘Experiments That Point to a New Understanding of Cancer’ is fascinating, and she asks the same questions I used to try and get my biology teachers to answer all the time: how, when every human starts off as one single cell, a fertilised egg, do the cells in your nose know to become a nose, and your elbow cells to be your elbow? And why do you not wake up one day with a foot for a hand? The cells in your hand contain the same information, and therefore the same potential to be a foot, as your foot does. And yet it doesn’t happen. And so, the same question can be asked of cancer. Can we really say that one day a single cell suddenly ups and decides its DNA is going to mutate, and it’s going to become cancer?

These questions led her to find that it is not a random event, but that all cells, including cancer, get their instructions from the context or the environment that surrounds them.

She works with breast cancer, and so uses the example of a mammary gland (the gland in a woman’s breast that produces milk) to explain how this works. 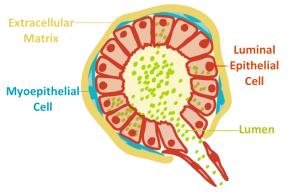 Anatomy of the Acinus cell https://medivizor.com/blog/2014/09/22/glucose-microenvironments-cancer-connections/

They took just a tiny bit of a mammary gland, called an ‘Acinus’, where milk is created (shown in the picture) and they asked how it was that those cells formed that structure. It was believed – up until this work – that the yellow cells around the red and blue ones in the picture were simply there to give the gland its structure. However, what they found when they took these cells out of the natural environment of the breast and placed them in a dish was that within a few days they forgot what they were, lost shape and stopped producing milk.

So what is the significance of this? What it shows is that environment and context overrides, and somehow signals to the cell to do different things. But the question became: how?

Mina Bissell thought that maybe the structural cells people always thought were only there for shape, actually contained information and signalled to the nucleus or ‘brain’ of the cell what to do.

She and her co-workers took cellular material containing the extracellular matrix (ECM) that surrounds breast cells and put the cells that had forgotten what they were into it. In a few days, the cells had re-organised into fully functioning glands that produced milk, demonstrating once again it is the context the cell finds itself in that determines what it will do.

But it’s what she did next that was really incredible. She formed the hypothesis that if context is the most dominant thing, then a cancer cell restored to normal context should revert back to a normal non-cancerous cell.

And so they tested it – they placed a malignant out-of-control breast cancer cell into a normal extracellular matrix context, and it reverted back to being a normal, functioning breast cell.

She has given us a different way of viewing cancer – in her words, a more hopeful one – one where it is not a game of the genetic lottery, or one where you one day randomly wake up with cancer, but a view where cancer is the result of a context or environment that is signalling a normal healthy cell to become cancer. What her studies have shown is that the 70 trillion cells in our bodies are constantly communicating to the extracellular matrix, which is communicating back to the nucleus of the cell, keeping and restoring balance.

Mina Bissell has said herself that arrogance kills curiosity and passion; she doesn’t understand everything and that there is far more to be discovered, and I agree. I think that we need to start matching up different research and findings to produce a larger understanding of what is at play in the body when cancer forms.

If we put those two pieces of evidence together, it is possible to consider that the way we live, or the environment we live in, may affect the environment inside the body, and that this might cause it to stop signalling cells to be healthy, and instead signal them to become cancer.

The cure for cancer is not a wonder drug or magic pill but perhaps will be found in the very body we often fight against. By restoring our internal and external environment to one that is healthy and harmonious, and living in a way where the environment does not stray so far from being so, we can in effect play a part in our present and future wellbeing.

Unfortunately this will not make drug companies millions, nor will it make anyone famous for finding a cure, and most radically, it will ask us to put our health before our ability to do as we like with our bodies, asking us to take responsibility for the scientifically confirmed effect our lifestyle choices have on our bodies.

It is for this reason perhaps that Mina Bissell’s research is not yet front page news, and that no one is connecting up the dots to what appears to be a very simple conclusion – that perhaps the key to understanding cancer and possibly the prevention of breast cancer and/or healing it, will be found in the way we live.

"Let's put the genetic story into true perspective: Our choices are what makes us be what we are, and they will determine our health."

"The choices we make not only affect our genes, but of those we affect. And therefore, we are responsible for all that happens and hence, we are not subjects of chance, incident or of genetic predispositions that we cannot have our own say over and thus heal."