The taxing problems of diabetes

The taxing problems of diabetes

The Sugar Industry plays a substantial role in the out of control growth of Non Communicable Diseases like Dementia and is culpable for significant tax burdens. For a moment, imagine what would be your reaction if a government edict was handed down that, from tomorrow, you will be incurring significantly increased tax contributions in order to fund the irresponsible behaviour of many others.

How would you feel?

Well, in truth, it has already happened. And while alcohol abuse or cigarette addiction might seem like the obvious cost burdens being referred to here, it is in the rise and rise of Sugar Abuse that we are seeing the most crippling harm. Diabetes is now at epidemic proportions – a substantially self-inflicted disease. 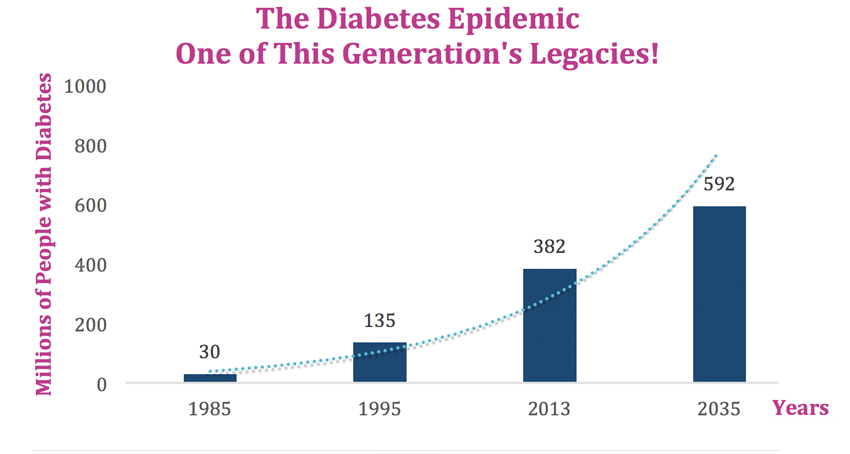 Or, to put this in perspective, growth of 20 times in a mere 50 years of a so-called modern medicine and a so-called progressive and educated civilisation. A massive cost to the citizens of the world.[4]

Our real medicine is the way we live. So most of the pharmaceutical costs, most of those hospital beds, most of those arising mental health consequences and a lot of those productivity issues that arise from the exponential growth of diabetes (as the one chosen example in this article) these past thirty years are being paid for by the taxpayer, you and me, in some way or other. The taxation of the responsible to fund poor choices on a grand scale has already happened, big time.

The global combined costs and productivity consequences will be hundreds of billions of dollars, mostly funded by taxpayers.

We get the taxes we deserve.

It is possible that self-inflicted diseases, like diabetes, will cripple government budgets; the way diabetes is growing, it alone could bankrupt many countries.

They say governments will not take action because politicians are afraid of the jobs that will be lost by a consequent declining sugar industry and its feeder industries (which is inevitable one day). So we tacitly keep the sugar industry jobs so as to maim or kill people – in the UK alone, amputations as a result of diabetes has escalated to an extraordinary 135 amputations per week![5] – whilst taxing the survivors to fund the consequences of humanity’s choices.

But what about re-deploying those jobs and reseeding the cane and cornfields to produce fresh crops of real food rather than fructose-based poisonous options?

What about some visionary government and leadership to morph that industry to serving healthy alternatives?

Are we being conned and heavily taxed because we accept the creation of a lifestyle model that is not the way?

The real question, over-arching all these questions, is why do individuals succumb to behaviours that are knowingly detrimental to their health and the way they live? This is not once off behaviour – it is serial abuse – just like the addiction to smoking. Why does the indoctrinated mind over-ride the wisdom of the all-knowing body? Could it be that there is a grand construct pulling us towards being less than we are made to be? And why would that be?

Sugar provides that very short-term energy rush needed to combat the worldwide epidemic that has beset humanity – the plague of exhaustion.

We are living in a way that exhausts us.

Exhaustion does not arise from working diligently, but rather from living in a way that depletes us ...

The evidence is everywhere but look no further than the burgeoning coffee kiosks for the first and most obvious clues.

Could it be that humanity’s growing addiction to sugar has not so much to do with the obviously corrupted 'food' supply chain but rather a lot to do with people feeding deep hurts arising from previous experiences? Deep hurts that control individuals so that they will turn to many sources to check out or numb themselves, so as not to feel those hurts. Hurts that need medicating by alcohol, tobacco, sugar, drugs and the like.

If we mask our lives with these substances we will never be able to unpick those hurts so that the extent of dysfunctional living becomes the new norm, which is where humanity seems to have arrived at today.

Sugar consumption appeals to those needing to suppress feelings and thereby to avoid addressing hurts. Sugar production, soft drinks, confectionery and the processed food sectors prey on that addiction to suppress hurts. So humanity remains stuck in its hurts; stuck way short of living joyful and fulfilled lives.

Exhaustion and hurts are holding us back. We are not living who we could truly be. We are living in overdrive and that is depleting us.

Meanwhile, until we choose to be in the fullness of who we really are, in this case sugar free, it seems our governments need to tax this sugar poison at its point of creation, so that the end user (the sugar consumer) pays a heavy price to fund the consequential tax deficits.

But in the end it comes down to our choices

The World Health Organisation estimates that Non Communicable Diseases (NCD) (essentially diseases relating to lifestyle and behaviour ... diseases derived from our everyday choices) account for a massive 63% of deaths (in some countries above 70%) and this rate of death by NCD's is growing alarmingly.[6]

In addition to diabetes, consider the costs associated with the ever-growing:

All these disorders largely stem from irresponsible choices. The over-taxed citizens of this world seem to be up for trillions of dollars of unnecessary taxes that could be avoided by making loving choices, whilst dealing with our hurts.

View this short excerpt of an interview with author of this article, Neil Gamble, talking about misdirected business strategies.