I am no one’s Sindy Doll

I am no one’s Sindy Doll

Throughout my life I have been many things to anyone and everyone – and until recently, nothing to myself.

My father had won a scholarship to his local King’s School (as inaugurated by Henry VIII) and so I was drilled into following in his footsteps. I didn’t, and all in all, I must have proved a great disappointment to him and never earned his respect – that is my father’s, not Henry VIII’s. I would probably have been beheaded, or imprisoned in the Tower of London!

My first husband tried drilling into me the change of chords in The Sultans of Swing, but as I couldn’t hear it, his frustration was meted out by his fists. I was also blamed for the weather and his consistently unhappy days at work.

I could never please him: firstly I was to be his mother, then Petula Clarke and later Debbie Harry. My hairstyles would change at his whim, the way I walked, the clothes . . . I became his Sindy doll, but again, I was a disappointment to him. I escaped with my young daughters before the inevitable consequences of all those disappointments were enacted more forcefully.

And so my life continued, trying to please people for fear of disappointing them and taking the blame for being a failure.

Then one rainy day at St. Andrew’s in Scotland, where only the hardiest of golfers were out challenging the elements on the rather daunting Championship links course, I heard myself telling someone "I’m not important!" The words resonated deep within and then sank from memory.

Many years later I was urgently flagged down on the motorway to discover that my car had been leaking petrol for miles. Waiting in the nearest service station for a tow and being plied with as much black coffee as I could drink, I shakily reviewed what might have happened that day.

My thoughts were terrifying and led me to consider all my near-death experiences: suffocation as a new-born; an emergency caesarean that almost killed both of us; an attempted drowning in the kitchen sink; being raped at knife-point, narrowly avoiding being stabbed in the back; waking up at the wheel of my car, just in time to avoid careering into a bridge stanchion when suffering with a virus:

It was an awakening that felt quite haunting, heavy and also unanswerable – and yet my curiosity had been awakened. I woke up to the many years of loneliness in my second marriage, investing my love and happiness into caring for our pets, and so I became aware of the words, to find me and to be free. I passed them off as meaningless and they remained buried for years.

Before our twentieth year together I extricated myself from this marriage and ventured down the spiritual new age route… and I was ‘successful’. I happily followed the winding mystical paths of Reiki, crystals and self-styled psychics, gurus, seers and hungrily read promising books; then the doubts started to set in.

There were no true answers – it was as though these people didn’t know anything about their own professed subjects, or that their experiences were not genuine.

Some while later, one sunny day while walking my dog Henry, I sat in a flower meadow alive with the buzzing of insects watching him play in the pond to cool down. Absorbing the warmth of the sun I felt at peace, a oneness with me; and then I began to feel that lovely warm glow deep inside. And so, the words that I had heard many years ago, which had remained meaningless until that very moment, rang gently in my ears: to find me, to be free.

I realised that there was no me. I didn’t know what I liked or disliked, let alone who I was. I had always fitted in with others, liking what they liked, disliking what they disliked.

Somewhere in my life I had lost me!

I then accepted that the next phase in my life would be about me and only me. No partners. Just me and Henry… and subconsciously he was named after this notorious monarch, Henry VIII: not for his deeds for he was not our most successful monarch, but for his presence, and strength of character! 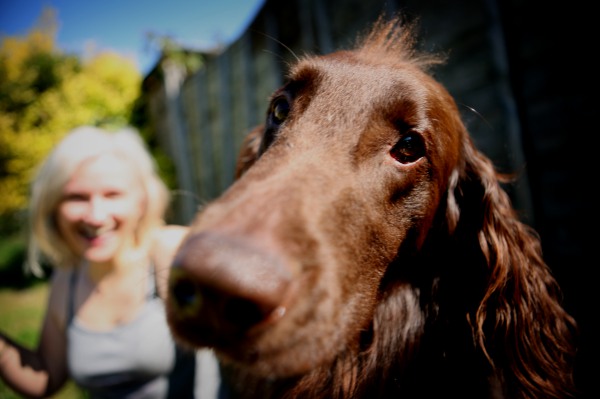 Personal development courses followed, and this group work brought tears and self-realisations as I remembered a phrase from years ago – "I am not important". I gained greater self-confidence and a small sense of ownership of me, but still, that warm inner glow seemed only accessible when we were out in nature, walking together and having fun! It was not a constant, let alone a regular or familiar feeling, just one that I craved.

Universal Medicine, Serge Benhayon and connecting with Me

Then one day I was given a copy of The Way of Initiation by Serge Benhayon. It sat on my bookcase for months; it was a thick book, over 700 pages, and it looked like a heavy read. I had noticed in horror the word God and balked at the assumed religious dogma.

How wrong I was! And so I read this purple book when I felt that I was ready. This time I was determined to not be fooled again!

As a result, and in order to substantiate Serge’s words and to improve my not-so-classic education, I purchased a number of philosophical and science books. My first purple books are littered with post-it notes and my own handwritten annotations where I have sought confirmations and substantiations; but more than anything, as I became familiar with Serge’s words, I began to realise that they made utter sense. They felt right.

I also discovered the Universal Medicine website and in a feeding frenzy devoured what was then on offer. I downloaded radio interviews and listened eagerly to the presenter chatting to this wonderful, all-knowing, content family man, who quite simply, just made sense.

There was much talk of the Gentle Breath Meditation™; it seemed the key to everything, but back then I had not read the all-important first book, nor discovered the audio downloads!

The following Easter I sat with my first esoteric practitioner and whilst some of her words irked me, I felt a stillness and a belonging in her company. My eyes had been opened.

It was remarkable and I still remember the warm glow within as my inner heart opened and I started to connect to me.

I can now feel and be comfortable with the fact that I am a nurturer, a mother, someone who cares deeply about others and who wants to help and share her experiences. I am a home-maker, a carer, a guardian.

But of more importance, I am now realising that I am nurturing myself and accepting that after some 45 years of toil and hardship, in-truth self-imposed, my body and physiology need time to heal too.

I started with the little things, like responding to my body’s needs immediately rather than putting them off until they were convenient, such as: making a drink when I felt thirsty, rather than delaying for another hour or so; answering calls of nature rather than diverting my attention to my computer screen; and getting up from my desk to actually get my lunch when I felt hungry rather than when it was convenient.

Just easy little things, but they made such a difference, learning to give my body preference over what I was doing – over my functionality. Giving up coffee showed me how much my body had been suffering from stress. I am learning what my body likes and does not like and more importantly, acknowledging this and doing something about it.

My friends and colleagues began to respond to the gentleness I brought with me every day and these relationships changed and became more meaningful.

A lovely warm inner glow has replaced the former emptiness.

This developing love within is inspiring me to dig deeper into my past and is supporting me as I discover my hidden secrets and darkest nightmares, to confront my lies and to learn about honesty – truthfully feeling into what it is I like and that which I dislike.